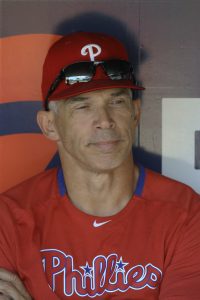 Joe Girardi is out as the Phillies manager, as the team announced today that he’s been “relieved of his duties.” Coaching assistant Bobby Meacham has also been dismissed. Bench coach Rob Thomson has been named interim manager and will hold that post for the remainder of the season, according to the team. To fill Thomson’s role, the Phillies have promoted Mike Calitri from quality assurance coach to bench coach.

“It has been a frustrating season for us up until this point, as we feel that our club has not played up to its capabilities,” said president of baseball operations Dave Dombrowski in a statement within today’s press release. “While all of us share the responsibility for the shortcomings, I felt that a change was needed and that a new voice in the clubhouse would give us the best chance to turn things around.  I believe we have a talented group that can get back on track, and I am confident that Rob, with his experience and familiarity with our club, is the right man to lead us going forward.”

Hired in advance of the 2020 season, the now-57-year-old Girardi came to the Phillies as an experienced dugout leader whom owner John Middleton hoped could pull the club out of what has now been more than a decade-long playoff drought. That hasn’t happened yet, and even on the heels of an aggressive offseason of spending to bolster the lineup, the Phils have fallen into a dismal swoon that has seen them plummet to seven games under .500 (22-29) and 12 games out of first place in the National League East.

More concerning, however, has been the team’s ineffectiveness in other areas. The Phillies rank tenth in the Majors with 230 runs scored and are tied for ninth with 58 home runs — both solid showings but not exactly the juggernaut offense the team and pundits (myself included) had expected. Philadelphia hitters have posted a combined .245/.310/.403 batting line, and the resulting 99 wRC+ ranks 18th in MLB and effectively amounts to league-average offensive output on the whole.

The Phillies’ bullpen woes may not date back quite as far as their defensive ineptitude, but faulty relief pitching has nevertheless been an unfortunate hallmark of Phillies baseball for at least the past few seasons. They relief corps is improved to an extent in 2022, ranking 21st in the game with a 4.15 ERA — an improvement over bottom-of-the-barrel showings in recent seasons. However, no team’s relievers have walked hitters at a higher clip than the Phillies’ 11.7% mark so far in 2022, and the bullpen is a top-heavy unit that has had to rely on inexperienced bargain pickups.  The trio of Nick Nelson, Andrew Bellatti and James Norwood, for instance, have accounted for nearly a third of the Phillies’ total innings of relief work.

Some of that, of course, falls on the manager’s usage of the relievers at his disposal. Bullpen management is a generally thankless job when executed well and also perhaps the most frequently cited flaw of any skipper when things are going poorly. Girardi faced plenty of criticism for his usage of the team’s bullpen at times, including some recent handling of closer Corey Knebel. Time will tell whether a managerial change will bring about better results from the relief corps, but it seems unlikely Thomson will be able to bring about significant change with the same group of personnel in the ’pen.

Just as it was expected that the Phils would struggle on defense, it was expected that their rotation would nonetheless be a strength — and that’s generally been true. Each of Zack Wheeler, Aaron Nola and Kyle Gibson are sporting ERAs comfortably south of 4.00, while Ranger Suarez and Zach Eflin have been at least serviceable in the mid-4.00s. Overall, the Phillies’ rotation ranks 14th with a 4.02 ERA, although their sixth-ranked 3.49 FIP (fielding-independent pitching) naturally suggests that the defense has let Philadelphia starters down.

Ultimately, it’ll have to come down to the Phillies’ lineup if they’re to turn things around. Schwarber is hitting for power and drawing walks but not doing much else, evidenced by his .192/.314/.429 batting line. Nick Castellanos, Alec Bohm and Rhys Hoskins have faded after hot starts, with Castellanos now rating as only a slightly above-average hitter and the others sitting south of league-average. J.T. Realmuto is still hitting better than the majority of big league catchers, but he’s well below his career rates and sitting close to league-average overall, himself. Second baseman Jean Segura, having a solid season at the plate, was recently lost for 10-12 weeks when he broke his finger attempting to bunt for a hit.

Bryce Harper continues to be a powerhouse presence in the middle of the lineup, carrying the batting order with a .303/.359/.534 output. But even he’s not operating neat 100%, as he’s dealing with a torn ligament in his elbow that has relegated him to designated hitter duties because he’s not able to throw from the outfield.

A team with Harper, Castellanos, Schwarber and Hoskins constituting the heart of the lineup is liable to go on an offensive tear at any moment, and as we saw with Schwarber during last year’s historic June power surge, hitters of that caliber can carry a team for lengthy stretches. There’s enough talent in the lineup and in the rotation for the Phillies to get hot and return to the fringes of the newly expanded 12-team playoff picture, but ownership seemingly no longer felt Girardi to be the best option to guide them there. The Phils will be a team worth monitoring closely over the next six weeks, because if Thomson’s unable to right the ship, the focus will turn to the possibility of trading some notable veterans in advance of this year’s Aug. 2 deadline.