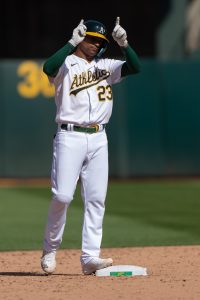 This season, Bethancourt has burst back onto the scene for an Oakland club that’s largely treading water. The right-handed hitter has slashed .249/.298/.385 in 182 plate appearances while catching and playing first base. He’s also spent ten games as the designated hitter.

For the Rays, they’re getting a versatile defender who can handle the catching spot. Tampa loves defensive versatility, and Bethancourt’s ability to move around the diamond will at least make it possible to keep three catchers on the roster when Mike Zunino returns from injury.

Of course, the Rays haven’t gotten much offense from any catcher on the roster. Zunino registered a measly 43 wRC+ at the dish before going on the injured list, with backup Rene Pinto posting a 27 wRC+ in 51 plate appearances and Francisco Mejia topping the group with a 74 wRC+. Bethancourt’s 99 wRC+ improves upon that lot, but more than that, he gives the Rays some depth at a position where it was previously lacking.

The Rays were thought to have some interest in Willson Contreras, perhaps the top trade available trade target on the market, though The Athletic’s Ken Rosenthal noted a reticence on Tampa’s part to pay high-end prospects for a rental like Contreras. Acquiring Bethancourt doesn’t necessarily take Tampa out of the running for Contreras, but it gives them plenty of leverage in later negotiations.

In many ways, Bethancourt represents a sort of everyman version of Contreras. He’s an offensive upgrade who bats right-handed and can move around the diamond when needed. To his advantage, Bethancourt doesn’t carry the financial obligations that Contreras does, perhaps giving Tampa another reason to consummate this deal now. By making the move today, the Rays give themselves a month to reassess their situation and decide if a bigger splash is necessary.

The Rays designated David McKay for assignment to make room on the 40-man roster for Bethancourt. After spending most of the spring with the Rays, McKay latched on with the Yankees to start the season. The Rays claimed him off waivers, but he has spent most of the season in Triple-A. He’ll again now be exposed to waivers.

As for Oakland, they’ll pick up a pair of minor leaguers for a veteran that probably didn’t fit on their next contender. MLB.com’s Martin Gallegos provides this quote from manager Mark Kotsay, who said, “Christian did a great job while he was here. It’s tough trading a player who has had an impact on and off the field. He’s been a leader in that clubhouse. .. I’m happy for him that he’s going to a team in contention and in need of catching.” Kotsay still has two catchers on the roster in Sean Murphy and Stephen Vogt.

For Oakland, neither player coming back is a top prospect, but that doesn’t mean they have no future in the bigs. Besides, considering Oakland’s minimal investment in Bethancourt, two minor leaguers is a solid return for the utility catcher.

Stevenson isn’t a top prospect, but he’s a fast-enough outfielder whose ability to play centerfield provides a cleaner path to the Majors than most, despite already being 25 years old. Originally a 10th-round draft choice by the Toronto Blue Jays, Stevenson has spent the past two seasons in the Rays farm system. In Triple-A this year, the southpaw has hit .265/.376/.353 in 203 plate appearances.

Fernandez was signed originally by the Rays out of Venezuela back in 2016. The 22-year-old registered a 2.79 ERA across 58 innings for the Single-A Charleston RiverDogs. He will go to High-A where he will join the Lansing rotation.